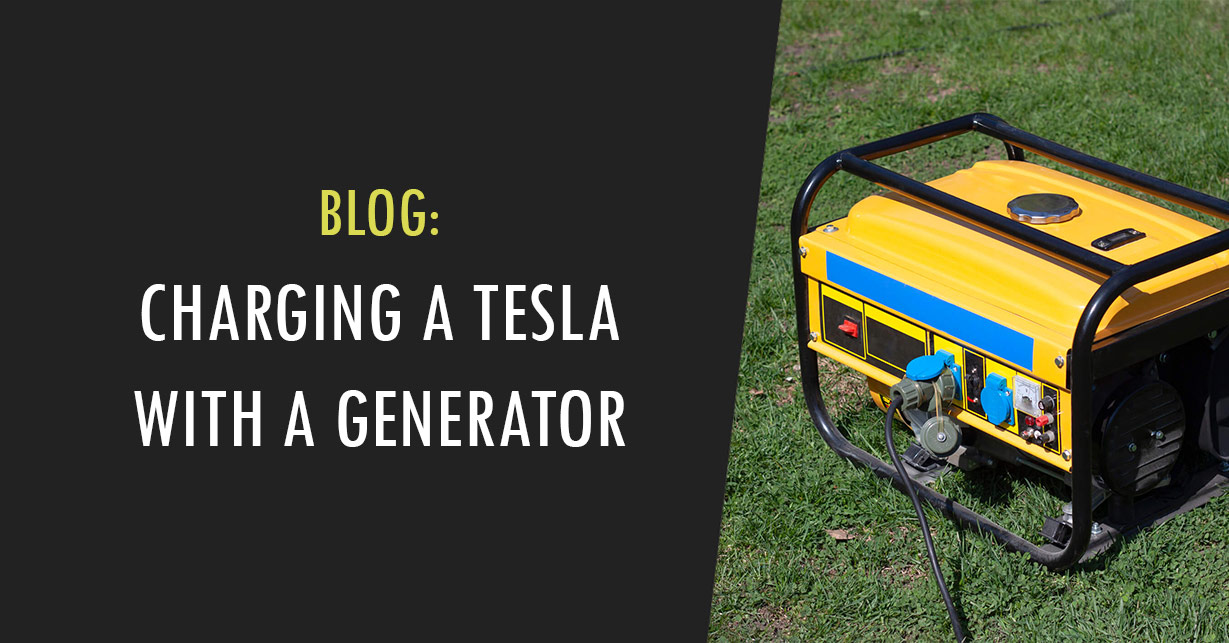 Getting stranded on the road if your Tesla runs out of battery is a common fear for new owners. If you have a generator in your trunk, you might be tempted to use it to charge your Tesla and drive it to the nearest charging station.

But, can a Tesla be charged with a portable generator? Yes, but there are some things you need to know.

Can You Charge Your Tesla with a Portable Generator?

Yes, you can charge your Tesla with certain generators. You will need a properly grounded inverter that outputs a clean sine wave. You will also need a generator that offers a big amount of wattage. At least 1500W is recommended when trying to charge a Tesla from a generator.

It is not practical and certainly not recommended to do so. You shouldn’t rely on a generator even as a backup plan to charge your EV. Using a power generator makes the whole process of driving your Tesla more polluting than driving a conventional, gas-powered car.

How To Charge a Tesla with a Power Generator

If you’ve determined that your generator outputs a clean, unmodified sine wave, and is properly grounded, you can start charging your car.

Your generator needs some time to warm up. Accordingly, set up the amps at the lowest settings using your dashboard monitor. Don’t add amps too quickly, or you’ll risk damaging your generator. Instead, slowly reach 28-30 A, and later, the generator’s maximum power.

Bear in mind that charging your Tesla will take quite some time. In particular, it can take more than 24 hours for a 4000W generator to fully charge a Tesla. You’ll only have to charge your Tesla to an extent and enough to get you to the closest power station.

Considerations for charging a Tesla with a generator

There are several crucial details you need to take into account before giving this method a try. Here are the most important factors:

The generator for your Tesla must output an unmodified, clean sine wave. All Teslas come with built-in protection that doesn’t allow charging from unstable power sources, as they are deemed an unstable and dirty source of power. Charging with a generator that outputs anything other than a clean sine wave may result in a damaging surge and harm to your car.

Tesla cars come with special power outlets. They are compatible with NEMA outlets owing to their mobile connectors. Older tesla models featured a 14-50 and 5-15 connection, whereas newer vehicles are limited to Generation 2, 5-15 outlets.

The power generator you use to charge your Tesla must be grounded. Usually, your generator’s frame will serve as the grounding element. However, many generators don’t feature a true ground, which will be recognized by the charging system of your Tesla, preventing the car from charging.

As for the wattage, you’ll need a sufficient amount of power for your generator. You should go for a generator that outputs a minimum of 1500 W. Anything below that might be insufficient to charge your Tesla at all.

We’ve already mentioned some power outlet compatibility aspects, but we’ll go into more detail in this section. Essentially, your choice comes down to inverter generators with three different outlet types, whose charging power is limited for several reasons.

First, your outlet type is designed to transport only a certain amount of power. Second, your Tesla will always draw less power than the outlet’s threshold. Finally, power generators have certain power limitations that curb their power output.

Here are the three outlet types, their power ratings, and the performance you can expect from them:

How Much Power Can You Get from Your Power Generator?

Again, several factors will restrict the amount of power you get from your power generator. For instance, here’s how much power each adapter can draw from a generator:

Moreover, here’s how much mileage you can get from your generator, depending on your Tesla model:

Considering the distance that your power generator can enable your Tesla to travel, you should think about whether charging is even worth the time. For example, if you’re using a NEMA 5-20 outlet, you can only get a recharge speed of about four miles per hour, which is almost the same as an average person’s walking speed.

Here are some additional tips for getting the best range with your Tesla.

When Should You Use a Power Generator to Charge Your Tesla?

To prevent your Tesla from using non-energy-efficient power sources, charge it with a generator only in an emergency situation.

For instance, if your Tesla loses power in the middle of the road and there’s a power outage, using a power generator may be the only way of getting back on track.

Charging your Tesla with power generator is inefficent and slow, but a viable option if there is no other alternative such as getting a tow back to a charging station.

Can You Charge Your Tesla While Driving?

It may sound tempting to extend your Tesla’s driving range by attaching it to a power generator while driving. However, this method isn’t safe at all for a number of reasons.

First, a Tesla won’t allow you to drive while you charge it, you may need to make some extensive modifications to the electrical and charging system of your car. This process can damage the electrical system and even void your warranty.

Another important consideration is that it is unsafe to have a running generation full of fuel running in your trunk. Also, where would the fumes go? Generators need to be run in an open space.

Overall, it is a really bad idea to charge your battery with a generator while driving. Leave that to certain stunt YouTube channels; do not attempt.

It is possible to charge your Tesla with a power generator but only properly grounded inverter generators with a clean, unmodified sine wave will work.

Additionally, while your chances of success are good, you should also plan how to proceed if you fail to charge your Tesla. For instance, you may not be able to resolve your grounding issues, leaving you with a useless generator. If you’re planning taking a long road trip, do not rely on a generator to charge your Tesla.

You might be better off waiting for a tow truck than wasting a lot of fuel charging your Tesla for several hours to get a meager amount of mileage.